The ACTERIA Prizes awarded by EFIS were established in 2012 to recognize and reward Europe’s young talents in the fields of immunology and allergology. Since 2020, Prizes have been awarded every year. In 2022, two ACTERIA Doctoral Prizes for the best PhD dissertations defended in the last 3 years, are awarded. These Prizes carry cash awards plus the potential funding of three-year research projects to be performed in European institutions. Next year in 2023, two ACTERIA Early Career Research Prizes will be awarded to young scientists who are on the track to play a leading role in immunology and allergology in Europe in years to come.

The winners of the 2022 ACTERIA Prizes awarded by EFIS are: 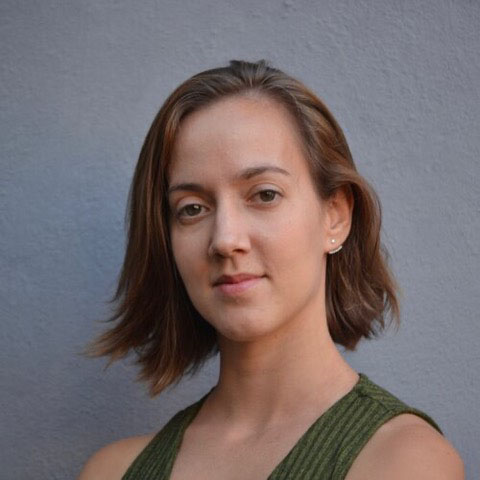 Marta JORDAO, DGfI, for her PhD thesis on the ontogeny, fate and function of central nervous system myeloid cells during homeostasis and neuroinflammation

Marta Jordāo, 34, received her BSc. in Genetics and Biotechnology from the University of Trás-os-Montes and Alto Douro (Portugal) and her MSc. in Cellular and Molecular Biology with specialization in Neuroscience from the University of Coimbra (Portugal). Subsequently, she obtained her PhD in Neuroimmunology in the lab of Prof. Dr. Marco Prinz at the University Medical Center of Freiburg (Germany). During her PhD, Marta Jordāo’s research focused on deciphering the origin of Central Nervous System (CNS) macrophages during health and to understand how diverse CNS myeloid cell populations acted during neuroinflammation, specifically in the context of Multiple Sclerosis (MS). Her thesis work was published in Nature Immunology and Science.

The CNS harbors different myeloid cell populations during homeostasis, mostly composed of microglia (MG) within the CNS parenchyma, as well as CNS border-associated macrophages (BAMs; comprising leptomeningeal, perivascular and choroid plexus macrophages) at the CNS interfaces. These cells are not only critical for CNS development but also for the maintenance of homeostasis and response to inflammation. Therefore, it is essential to accurately identify their cellular origins and the potential microenvironmental cues that regulate their different phenotypes. In striking contrast to what had been previously believed, Marta Jordāo and her colleagues could prove that BAMs are embryonically derived from the yolk-sac progenitors and seed the brain at early stages of embryonic development with their development and survival being independent of the transcription factor MYB. Moreover, during adulthood, they found that both perivascular and meningeal macrophages do not rely on exchange with blood monocytes to sustain their macrophage pool. Their study thus completely changed our understanding of the brain macrophage compartment and CNS immunosurveillance under healthy conditions. The recognition that there are long-lived perivascular and meningeal macrophages at the CNS barriers opened new avenues for their roles and potential manipulation in both health and disease.

While the naïve CNS is mainly populated by tissue-resident macrophages, myeloid cell complexity increases considerably during neuroinflammation. In the context of MS, the reactivation of T cells by local CNS-associated antigen-presenting cells (APCs) is crucial for disease induction. In this regard, not only BAMs but also dendritic cells (DCs) and infiltrating monocyte-derived cells (MdCs), have emerged as potential APCs in vivo. However, due to the phenotypic similarities between these myeloid populations during neuroinflammation, their discrimination was often inaccurate and did not allow a proper assessment of their functions. To unravel the extent of the myeloid contribution to the disease onset and progression, Marta Jordāo and her colleagues have analyzed each of the CNS microanatomical niches by single-cell RNA sequencing. A unique core gene signature for all BAMs was identified for the first time. Besides resident macrophages, MdCs and DCs were observed to invade the CNS compartments at very early stages of the disease. Two-photon in vivo imaging demonstrated the higher aptitude for CCR2+ cells (composed of both MdCs and DCs) to interact with T cells in comparison to resident MG and BAMs. Moreover, although CNS-resident macrophages have antigen-presenting capacity, CD11c+CCR2+ MdCs/DCs have the predominant role for T cell reactivation and consequent onset of the pathology. These data suggest that blocking specific CD11c+ cell subsets could be used for targeted therapeutic interventions. In sum, this work provided crucial new insights regarding the source of antigen presentation in the context of MS and the discrimination of different CNS myeloid subsets that can act as potential targetable cell populations in MS patients.

Dr. Marta Jordāo is currently doing her postdoc in the lab of Prof. Johanna Joyce at the University of Lausanne (Switzerland). She was awarded an EMBO long-term postdoctoral fellowship (2019-2020) and a Human Frontier Science Program postdoctoral fellowship (2020-2023) for her research work. She is currently deciphering the role of tumor-associated macrophages and CNS lymphatics in the formation and progression of glioblastoma and brain metastasis. 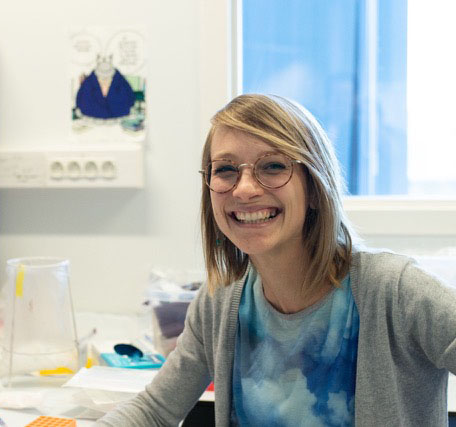 Coraline RADERMACKER, BIS, for her PhD thesis on the role of neutrophils and “Neutrophil Extracellular Traps” in allergic asthma onset

Coraline Radermecker, 34, graduated in 2012 as a Doctor in Veterinary Medicine from the University of Liege, Belgium. She began her PhD as a Research fellow of the F.R.S.-FNRS under the supervision of Pr. Fabrice Bureau and then pursued her doctoral studies in the Immunophysiology laboratory of Pr. Thomas Marichal. During her thesis, she was interested in the biology of lung myeloid cells, their responses to environmental triggers in the context of allergic asthma and more recently their contribution to COVID-19 physiopathology. She is author of 10 original research articles, among others in Nature Immunology, Immunity and The Journal of Experimental Medicine, one review article and a book chapter (all first-authored). Her doctoral work has been rewarded in 2019 by the GSK Awards in Pneumology, in 2020 by the Paul Capel Prize and in 2021 by the McKinsey and Company Prize.

In the first part of her PhD, she was implicated, together with Catherine Sabatel, in a project aiming to investigate how exposure to bacterial-derived products, like LPS or CpG-rich DNA (CpG), protects the host against allergic asthma. They discovered that particular lung macrophages secreting IL-10, the interstitial macrophages (IM), massively expanded in the lung upon CpG exposure from lung and splenic CCR2-independent monocytes. By performing adoptive transfer experiments, they demonstrated that IM were sufficient to mediate the protective effects of CpG in their model.

In the second part of her thesis, she aimed to understand how distinct pro-allergic environmental conditions, such as an excess of hygiene, respiratory viral infections and air pollutants, could promote susceptibility to allergic asthma by modulating the host immune response. In murine models of allergic asthma promoted by these three pro-allergic factors, she demonstrated that each pro-allergic environment was associated with an important recruitment of neutrophils in the lungs. By performing single cell RNA sequencing analyses, she discovered that neutrophils recruited to the lung after exposure to the three pro-allergic environments shared some unique phenotypic and functional characteristics, such as the release of Neutrophil Extracellular Traps (NETs). She next demonstrated that NETs triggered the activation of CD11b+Ly-6C+ dendritic cells and promoted their uptake of house dust mite (HDM), an essential step to allow allergic sensitization. Finally, she demonstrated that NETs represented key players in asthma onset by inhibiting them in the three models. In this study, for the first time, Coraline and her colleagues identified a common determinant induced by unrelated pro-allergic environments to promote asthma onset.

Finally, during the COVID lockdown, she collaborated with the service of anatomopathology of Professor Philippe Delvenne who provided her with lung biopsies of deceased severe COVID-19 patients in order to investigate the presence of NETs in lungs of these patients. She detected NETs in the lungs of COVID-19 patients, described their anatomic localization (vascular, interstitial, bronchial and alveolar) and characterized the lesions associated with NETs-rich areas. NETs were found in the four distinct anatomic compartments of the lung and vascular NETs were associated to microthrombi, arguing for an implication of NETs in pathological events associated to the disease.

Dr Radermecker is now “Chargé de recherche” of the F.R.S.-FNRS in the laboratory of Immunophysiology of Pr Marichal where she is investigating the role of neutrophils in lung homeostasis, with a special focus on their long-term control of lung endothelial cell stemness, identity and function.

Candidates were carefully evaluated and the winners selected by a prestigious jury of eminent scientists in the field. The Jury was chaired by Prof. Catherine Sautès-Fridman, Cordeliers Research Center, Paris (FR), Past President of EFIS, and recipient of the Behring Metchnikoff Prize and the Prix Petit d’Ormoy from the French Academy of Sciences. Prof. Sautès-Fridman's fellow jury members were:

Fondation ACTERIA - Acting on European Research in Immunology and Allergology) promotes noncommercial fundamental research in immunology and allergology in Europe and Switzerland. It participates in the exchange of research and knowhow exchange between Switzerland and Europe by awarding the ACTERIA Prizes and by supporting postdoctoral research by early career researchers in Europe without distinction to country, nationality, race, religion, gender or any other grounds for discrimination. www.acteria.ch

EFIS - the European Federation of Immunological Societies is an umbrella organization that represents more than 14,000 individual members from 35 European member societies, and reaches beyond European boundaries to include Israel. The main goals of EFIS are to support immunological research and education, as well as to strengthen scientific interaction amongst its members. EFIS focuses particularly on supporting young scientists, e.g., through fellowships, travel grants and awards.